Think FarmVille or Draw Something, but with players betting on live races

The federal government shut down the three biggest online poker sites last year in a sweep known as "Black Friday," wiping out the popular and lucrative industry. Online poker is out of commission until a significant number of states legalize it or Congress passes a federal law permitting it, leaving a big hole in the market that Derby Jackpot hopes to fill. "I think it's definitely as fun as poker," cofounder Tom Hessert said. "I think Derby Jackpot is way more fun than poker," countered his brother and cofounder Walt.

Gambling on horse races is one of the few forms of online betting that is unequivocally legal in most states in the US. While poker, bingo, and most sports betting is verboten, the Interstate Horseracing Act of 1978 made it legal to gamble on racing at "off-track betting" parlors, where bookies would call in the bets to the track. Online betting followed naturally, and the 2006 Unlawful Internet Gambling Enforcement Act has an exception for horse racing.

Most horse racing betting sites, however, are full of statistics and inscrutable jargon — ever hear of a "superfecta" bet, a trixie, or a double carpet? Instead, Derby Jackpot has cute animations, a chatroom, and other features designed to make the game fun, and habit-forming for your average mom on Facebook. It seems silly to talk about gamifying gambling, but that’s what Derby Jackpot is doing. No prior knowledge of the sport required.

"It's 80 percent gambling and 20 percent horses," Tom told me back in April before the site had launched. Derby Jackpot has now been in closed beta for five months, and will open to the public in 2013.

Tom, Walt, and their brother Bill are the cofounders of Derby Jackpot. (They're actually the oldest of six brothers.) Between them they have experience in ecommerce, entrepreneurship, and horse racing. Derby Jackpot’s advisors are also an eclectic bunch: a veteran lawyer from the horse racing industry, a former Zynga designer, and Steven Levitt, co-author of Freakonomics, who worked on horse-picking strategies with Bill Hessert.

The Hesserts have started playing down the "80 percent gambling" part of the game and talking up the horsey parts, in order to avoid making it seem like the game is a gimmick to get around laws prohibiting internet gambling.

When asked where the idea came from, Tom now tells a story about when the brothers went to the Preakness Stakes, the second leg in the Triple Crown, and he won a thrilling $25 on his first bet. "I’m always thinking of ideas," he explained on a recent office visit. "We realized there was no easy, fun way to place my bet online."

Derby Jackpot is certainly easy. Players deposit money from a credit card, prepaid card, or via the payments service Dwolla. They can then place bets on the horses in the next live race, which are represented by identical avatars with different-colored masks. 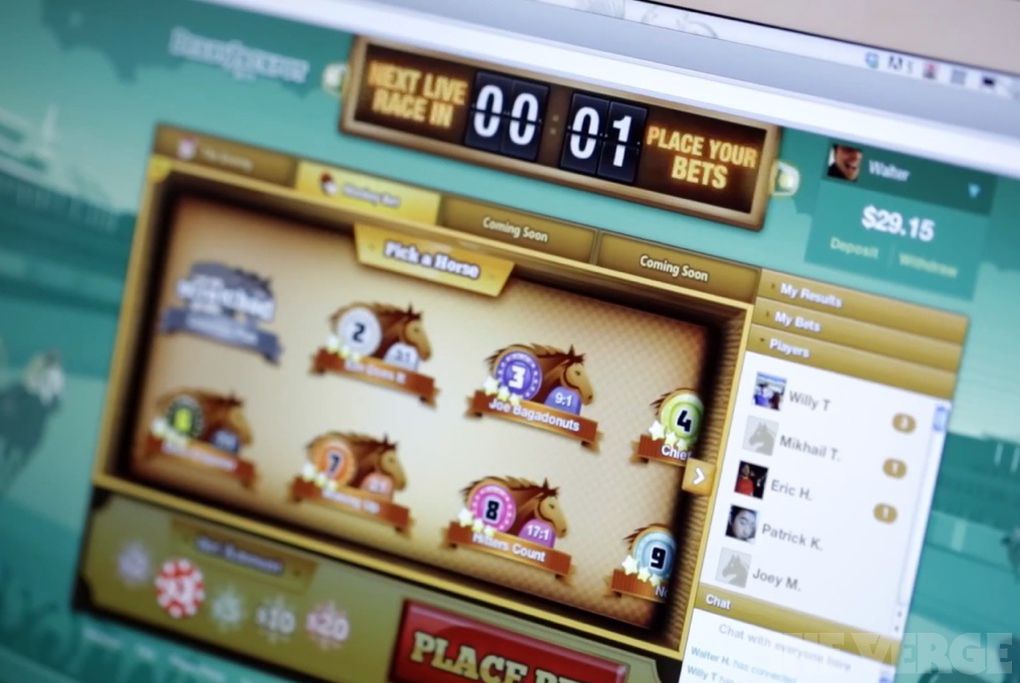 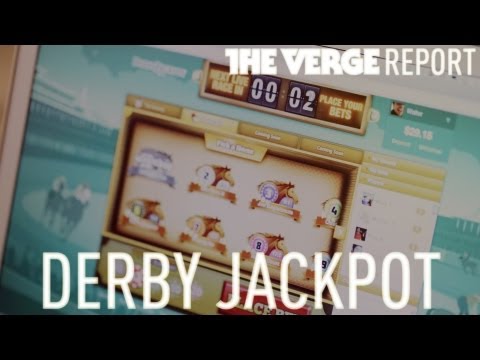 There is no information about the jockey, for example, or the horse's history, or even its age — just the horse’s name and its odds. Bets are as low as $2 and can pay out as much as $2,000. Once the results come in, the site encourages players to tweet their winnings.

Derby Jackpot may have as much to do with horse racing as FarmVille has to do with agriculture, but casual fans are exactly what the horse racing industry needs. Horse racing is going the way of Latin — to put it bluntly, it appeals mostly to old white aristocrats. The average age of a horse racing fan is 51, expected to increase to 57 by 2020, according to a comprehensive industry report released in 2011. And with recent crackdowns on many of the major poker websites, there is a hole in the market for a new breed of online gambling.

Horse racing is going the way of Latin

"Online betting is definitely the future," said Mike Salvar, an entrepreneur who worked on that report for the consulting firm McKinsey and Company. "Demystifying it for a casual fan is the number one priority, and making online channels accessible to new fans."

New York’s city-owned off-track betting houses closed at the end of 2010 due to unprofitability. By the end, they’d devolved into sadness repositories where smatterings of unemployed men went to drink before noon.

By contrast, more than 300 guests passed through the Derby Jackpot party. The average age was around 35. They were chatting and drinking, betting on races via the provided iPads, and occasionally watching the screens — the definition of casual fans. And of course, they were tweeting.

Texas Hold them Poker Tournament Technique – How to Play QQ