Money lines are the simplest type of bet. In a money-line wager, bettors make bets simply on who will win the game. This does not involve any point spreads or margins of victory. This form of betting odds focuses just on who will be the outright winner. Let’s take a look at an example. Team A’s odds are -150, while Team B’s odds are +130.

The first thing to take notice of is the plus and minus sign in front of the number. The team with a plus sign in front of the odds is the underdog — in this case, Team B. Because of this fact, they can potentially earn a higher payout if they win. The number in the odds means something slightly different depending on whether it has a positive or negative sign in front of it. With its odds set at +130, Team B offers a $130 payout for every $100 bet on it. So if someone were to bet on Team B, and Team B won, that person would win $130.

A minus sign at the beginning of odds means the team is favored to win. The number indicates how much someone would need to wager in order to win $100. So if someone were to place a $150 bet in favor of Team A, and Team A won the game, that person would win $100. If that person were to bet $300 instead, and Team A still won, they would win $200.

The point spread is another form of betting odds that’s very similar to a money-line bet. The difference is that in addition to predicting who will win the game, the point spread includes a margin of victory. In certain cases—such as in college basketball and college football—there is a huge discrepancy in talent between the two teams playing. In those cases, betting the money-line is too obvious, because it is clear that one team will beat the other. That’s when the point spread comes into play, as the oddsmakers will set a line where there is a margin of victory.

For example, imagine that two teams, Team A and Team B, are facing each other. Team A may have odds of +22.5 while Team B’s odds are -22.5. In this case, Team B is favored to win. Just like in the money-line bet, the negative sign before the number indicates who is expected to win. The number represents the expected margin of victory. if you bet on Team B, you need them to win by more than 22.5 points for you to cover your bet. That means they need to win the game by 23 points or more. If you bet on Team A, that means they can lose by 22 points or less, or win the game, and you still win your bet. It’s a way of evening the playing field, even if one team is highly favored to win over the other.

If, during the actual game, the margin of victory lands exactly on the spread, it is called a push or a tie, and no one wins the bet

Point spreads will also have money-line odds attached. Just like in a money-line bet, this number indicates what the payout will be in the case of a win. For example, the spread and odds for Team B might be (-22.5, -120). This means that Team B is favored to win by more than 22.5 points. If you were to make this bet and Team B did win by 23 points or more, and you bet $120 on the game, then you would win $100. 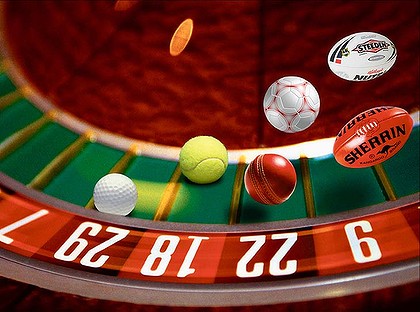 When you’re looking at the betting odds for totals, this is a reflection of the combined score of both teams. That means that you are looking at whether the combined score of both sides will go over or under a set number. (For that reason, this type of bet is also often called an over / under bet.) For example, the sportsbook might set the total at 66 for a college football game. This means that they predict that the two teams will score a combined total of 66 points. You will then place a wager on whether the actual combined score will be over or under that amount. If you think that one or both teams has a particularly strong offense and it will be a high-scoring affair, you would bet over. If you think it will be a defensive struggle, ending in very low scores on both or either side, then you would bet under. If the final score is something like 44-40, then the combined score would be 84, meaning the game is an over. If the final score is something like 33-32, making the combined score 65, then it is an over.

Sometimes, the combined scores will land right on the total. In our example, if the score ended up being something like 34-32, then the combined score would be 66, exactly the predicted total. This situation is called a push or a tie. In these cases, no one wins the bet, and you would simply get your money back. To avoid these situations, sportsbooks will often set the total at a half number, like 66.5. This way, if the final combined score was 66, it would be an under, and a 67 would be an over.

While money lines, point spreads, and totals generally focus on the short term and specific matches, futures are long-term betting odds. They focus on events that will happen further down the line—in the future. In this case, you’re betting on things like who will win a division or who will win a championship well in advance.

There are some benefits and some risks associated with betting on futures. If you win, you can earn a hefty payout. On the flip side, however, your money is locked up for a long period of time. During that time, a lot of things can go wrong. If you bet on a particular team to win the championship and one of their star players is injured, suddenly their prospects of winning do not look quite as good. Sometimes, the team may just hit a slump partway through the season and lose a lot of valuable momentum. Just like with all betting, it’s important to calculate the risks and possible rewards.

In this kind of bet, the odds are set at the beginning of the season, but they can go up or down as time goes on. Once you make your bet, however, it is locked in at whatever the odds were at the time you placed the bet. This is why making a bet on a long shot early on can bring a potentially substantial payoff. At the beginning of the season, it isn’t entirely clear how well the team will do over the season, and so the odds are longer, offering higher rewards. If, over the course of the season, though, a team is showing that they’ve got a good chance of winning, the odds for them improve, the risk goes down, and the payoff gets smaller. Choosing exactly when to make this sort of bet is important.

Futures betting can be applied to more than just national championships. It can also be applied to things such as who will win the MVP award or other events that might happen down the line.

Prop bets, or “proposition bets,” can be on literally just about anything. From an individual player’s performance in a particular game to who will win an award at the end of the season, from how many times a broadcaster’s logo will appear on-screen to how many times a coach will be escorted off the court, there really is no limit to what prop bets can cover.

Prop bets generally refer to anything that is not directly tied to the outcome of the game. They can be over / under bets on how many times a player or announcer does something, or they can be bets on which team will do better in general on a certain topic. For example, in a football game, the oddsmakers may set the odds for which team will get more running yards.

In the end, a prop bet be on just about anything. Whatever an oddsmaker can imagine can become an interesting prop bet.

SPORTS BETTING FOR BEGINNERS | WHAT IS THE MONEYLINE