He alleged that he brought sports bags full of cash into William Hill stores and asked staff to put them behind the counter for safekeeping, withdrawing the money when he wanted to place bets.

According to the addict, his bets were funded by money he stole from clients while working in the property industry in Dubai. The gambler was interviewed by the Metropolitan police in April but has not been charged after agreeing to help his victims seek redress from the bookmakers. He cannot return to Dubai, where he believes that he would be arrested for presenting a cheque that he cannot honour – an offence in the emirate.

The law firm Mackrell Turner Garrett, acting on behalf of his victims, is preparing a claim against William Hill for about £600,000, alleging that the bookmaker failed in its obligations to prevent money-laundering and intervene to stop problem gambling.

Bookmakers are required to ask about the source of gamblers’ funds when they stake large amounts. They are also required to ask similar questions to ensure problem gamblers are not staking more than they can afford.

Documents handed to the Guardian show that William Hill staff did ask whether the addict was comfortable with his level of betting and filed internal reports about their intervention and his response. But it appears that William Hill did not write to him asking for information about the source of his funds until 20 September 2016, when he had already gambled £458,000 in three months. 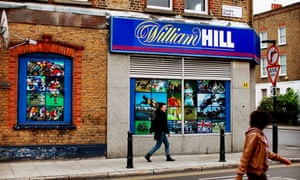