Gorodestky said he met Beckham through one of the NFL star’s cousins who Gorodetsky already knew. The gambler and the NFL star connected, of course, at the High Limit Lounge, according to Gorodetsky.

“I give him the money. Next thing you know we’re sitting there (playing blackjack) for four hours. He won a couple of thousand and gave me my money back. Then he’s like, ‘Come to dinner with us.’ "

Holding his phone, Gorodetsky showed what he said was a text message from Beckham indicating an interest in betting $20,000 on a baseball game — a prospect that Gorodetsky said fell through.

"We do not know Robert nor can we confirm any of his statements,” he wrote via email.

Sandhu also wrote, "We have confirmed with Odell that he has never placed any bets on any professional sports games. We can assure you that he has and will always continue to comply with all of the NFL’s rules and regulations regarding gambling activities.”

League policy prohibits any NFL personnel from betting on NFL games or any other professional, college or Olympic sport.

Within two hours of USA TODAY Sports sending an email to Beckham’s agent seeking comment, Gorodetsky showed by text message a copy of the email and indicated he had heard from the same cousin of Beckham who introduced Gorodetsky and Beckham.

"He’s flipping out on me,” Gorodetsky said by text message. "I told them I’m denying it and tracking down to see what’s going on.”

During the night in the High Limit Room when he spoke about Beckham, Gorodetsky said gambling is pervasive among professional athletes, especially basketball players, and that he has gained access to NBA circles.

Periodically, Gorodetsky said, he flies to Los Angeles on Fridays to play in a poker game hosted by Shelly Sterling, wife of Donald Sterling, former owner of the Los Angeles Clippers. As evidence, Gorodetsky showed photos of himself and poker chips that on one side read “Shelly Sterling’’ and on the other side “Clippers.’’ He also said he knows several NBA players, including Los Angeles Lakers rookie Kyle Kuzma.

“I’ll go to games, hit him up,’’ said Gorodetsky, adding that he met Kuzma last year when Kuzma was at the University of Utah. “He’ll always secretly be like, ‘Who do you got?’ You know what I’m saying?

“But it’s like a dark subject, because he’s, like, playing the game and he doesn’t want to talk about gambling. You know what I’m saying?’’

Gorodetsky said he never gambled with Kuzma. A spokesman for the Lakers referred requests for comment to Kuzma’s agent, Zach Kurtin. Kurtin said he had no comment and that Kuzma would have no comment about the matter. 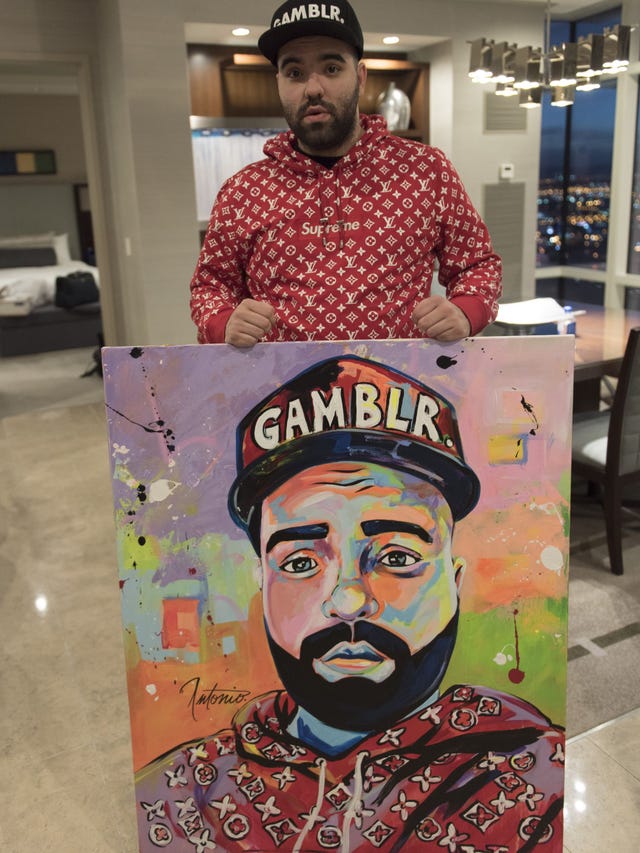 Because of the sensitive nature of gambling, Gorodetsky said, he refuses to discuss his ties with other NBA players he said he knows.

Gorodetsky shared a photo of himself and NBA star Russell Westbook at a poker table that was posted on Instagram in October 2014, when Gorodetsky said the two played high-stakes poker together at the Wynn Las Vegas hotel.

A Thunder team spokesman said Westbrook had no comment.

Gorodetsky also showed text messages he said he received from Cleveland Cavaliers shooting coach Damon Jones, a retired NBA player in his second season as an assistant for the Cavs. Gorodetsky pointed to a recent text message that he said was from Jones in which Jones said he was only betting on baseball.

“He used to text me everyday and ask me who I like," Gorodetsky said.

Russ King, who handles security for Gorodetsky, said he saw Gorodetsky and Jones together several times in July during the NBA’s summer league held in Las Vegas. Jones was serving as head coach of the Cavaliers team at the same time Gorodetsky said he was betting up to $150,000 a day on summer league games.

“I didn’t get much from (Jones) other than none of that’s true,” Evans said. "Or he’s not even familiar with the guy. That’s what I got from him.”

Gorodetsky said he has gambled with several celebrities and was closest with Drake, the rapper and singer who Gorodetsky said once wired him $100,000 to bet on games. He said he met Drake by chance in the High Limit Lounge and for months Drake gambled on games through Gorodetsky.

“I used to wake up to my girlfriend texting me good morning and then I’d wake up to Drake, ‘Who do you like today?’ ” Gorodetsky said.

According to Gorodetsky, Drake grew distracted because of the betting and, at the urging of Drake’s manager, stopped contacting Gorodetsky.

Drake declined to comment, according to Melissa Nathan, a spokeswoman for the singer.

Rob gorodetsky: is this the future face of sports betting?
Tagged on: betting    face    future    gorodetsky    sports    this