America’s Pastime offers gamblers more opportunities to make a wager than any other sport. With over 2,430 games played across six months, there’s always another bet to be laid on the MLB.

Baseball betting at your sportsbook doesn’t offer the most possible bets per game, but there are more than enough to find a betting angle you like. (But don’t forget: discipline is always crucial to being successful in the long run.) Between the moneyline, runline, game total, and tons of props, here are some of the most basic ways to put a bet down on the old ballgame.

The moneyline is the most popular way to bet on a game by game basis. However, you won’t have much time to consider your bets ahead of time. MLB moneylines are only released after the teams involved are done playing the day before. This means that lines will usually be up for less than 24 hours.

When it comes to placing a bet, a typical MLB moneyline looks like this.

As we showed you earlier in our guide to all things odds related, American odds are written relative to a $100 wager, so you would need to put $220 on the Dodgers to win $100 back. If you staked $100 on the Brewers, you would win $190 should they pull off the upset.

Not only will each MLB moneyline list the teams playing, but it will also include the day’s starting pitchers with the line. Odds can vary significantly between the same teams over the course of 48 hours based on who’s pitching. The Dodgers will almost always be heavy favorites when Clayton Kershaw is on the mound (like in the above example). The next day when, say, Rich Hill takes the bump, their moneyline will be a lot closer to +100. Of course, this would depend on who the Brewers counter with.

The Importance of Pitchers in MLB Baseball Betting

In fact, starting pitching is such a big part of handicapping baseball that sportsbooks offer a betting option called “listed pitcher.” Selecting a listed pitcher bet means that, if one of the projected starters for that day doesn’t throw the first pitch of the ballgame, then the bet is deemed no action and the wager is returned in full. They also have “one pitcher” options, where bettors select just one pitcher that has to start to have action. 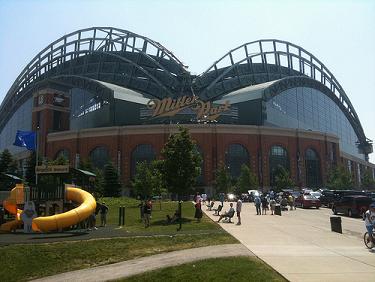 In this age of instant information, “listed pitcher” is only protection against sickness or a freak accident in warmups. This is because if there are any injury concerns around a pitcher, you’d hear about it long before. However, if you love the Dodgers to win, and you don’t care if Kershaw is throwing, you can select “action” on a moneyline bet, and no matter who steps to the mound to start the game, your wager will count.

As you likely know, the baseball schedule is broken up into series, which see the same teams play each other for two, three, or four straight days. The vast majority of series are three-game sets, and many sportsbooks will post lines for those series, as a whole, allowing you to wager on which team will win (at least) two of the three games. Think of it as a moneyline bet for a weekend. Just bet on a team, and if they take at least two of three games in a series, you’ll win. However, series bets come with a few stipulations. For example, games can be ruled no action if a game is postponed or suspended. You also can’t bet two-game series.

Betting on the Runline

Beyond picking straight winners on the moneyline, the MLB also has its own spread option, called the “runline,” though it is different than the fluctuating lines of basketball and football.

The runline is always set at -1.5 for the favorite, meaning that team must win by two or more runs to cash. If the underdog loses by one run or wins, they cover the bet.

Because the spread is always the same, the odds will shift around the runline. Of course, this based on the quality of the favorite. A dominant team like the Dodgers with Kershaw on the mount might be listed at -130 to cover the runline (as in the example above.) In contrast, a lesser favorite could be listed at +170 or higher to win its game by two runs or more.

Just like the moneyline, the runline will come with a listed pitcher and one pitcher options.

Again, just as with football and basketball, baseball games come with game totals (a.k.a. over/under), which we explained in detail here. In the MLB, game totals typically range from 7 to 10 runs, and often land on half-run increments, like 8.5. 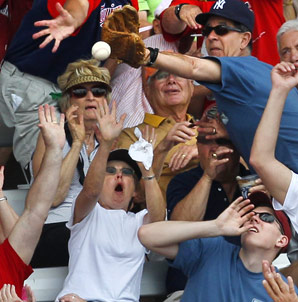 Much like the moneyline and the runline, the game total will be heavily influenced by the quality of the starting pitchers. When someone like Clayton Kershaw is matched up with another ace, for instance, Max Scherzer of the Nationals, you’re apt to see a rare sub-seven total. When a team with a high-powered offense is facing a Triple A call-up late in the year, the total could creep into the double-digits.

Let’s go back to our Dodgers/Brewers example to see what this will look like in practice.

The total in this game is eight runs. If you want to bet the over, you select the “O 8.” If nine or more runs are scored in the game, you win the bet. If exactly eight runs are scored, it’s a push (i.e. a tie) and your wager will be returned. Since the over is deemed the more likely outcome in this instance (as evidenced by the -120 payout attached thereto), you have to wager $120 to make $100. The under is at even money, meaning you only need to wager $100 to win $100.

Over/under may also have a listed pitcher option depending on what sportsbook you’re using.

If the odds on the moneyline or runline aren’t big enough for your taste, MLB props are where you can find longer odds on a daily basis. As you can see, the more specific a prediction, the bigger the potential payout. However, the overround on props (which considers the implied probability of the options go well beyond 100-percent) tends to be larger than for moneyline, runline, and total bets. That’s why both options for the “total strikeouts” prop is less than even money.

Moneyline and game total bets are also available for five-inning lines. This means whichever team is leading after the fifth inning wins the bet, and the total is settled using the total runs scored to that point.

As for long-term bets, the MLB has the usual futures you find for all major North American leagues: championship odds and division winners. The quickest sportsbooks will post odds immediately after the previous season’s World Series. Likely, they will be available over the course of the entire season, with teams only getting taken off the board when mathematically eliminated from contention. You can also place bets for individual awards like MVP or Cy Young.

Win totals are released every spring for all 30 MLB teams for betting over or under. The totals will be taken down at the start of the season, though, so you only have a small window to bet on them.

[TUTORIAL] HOW TO ENABLE HIGH FRAME RATE MODE MOBILE LEGENDS I NO ROOT, NO MOD APK

Mlb baseball betting: how to bet on games (in 10 minutes or less)
Tagged on: baseball    betting    games    less    minutes