New Jersey fought for almost eight years in litigation, but the struggle was worth it. On May 14, 2018, they finally won their case in the highest court in the land.

This state has now become the leading advocate for smart and aggressive policies around sports betting, and the United States has the potential to become the world leader in this industry. In fact, by the end of 2018, legal sports betting had already been established in seven states.

However, market growth will now depend on how willing state and federal lawmakers are to embrace policies that enable the industry to expand and grab a piece of the market share in the offshore markets.

So what does 2019 hold for the sports betting industry? It probably won’t be all sunshine and roses, but it’s sure to see a host of exciting developments.

On that note, here’s what you currently need to know about sports betting in the United States:

Can I Bet on Sports Now?

It’s still a state-by-state situation, which means you can’t just start throwing down cold, hard cash on a sporting event because of this ruling; but you can now legally bet on sports in the states of Nevada, Delaware, New Jersey, Mississippi, West Virginia, New Mexico, Pennsylvania, and Rhode Island. 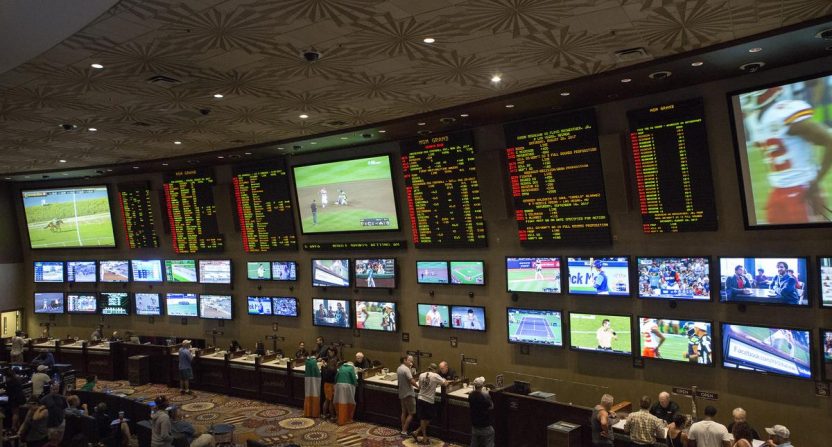 Once again, that doesn’t mean betting whenever and wherever you feel like it. Each state has implemented their own laws to help regulate the sports betting industry.

For example, in Rhode Island Gov. Gina Raimondo signed the state budget, including language that permitted sports betting. Rhode Island’s lottery is overseeing the regulatory framework of sports betting, and they have authorized The Twin River Casino to accept sports betting in two locations under the law, which does not allow for mobile betting.

However, in New Jersey, there are multiple sportsbooks for legal betting including a William Hill sportsbook at Monmouth Park that took the first bets on June 14, 2018. There is also the Borgata in Atlantic City, another legal sportsbook and you can also legally bet on sports at FanDuel’s at the Meadowlands. Plus, there are more than ten apps for online wagering in New Jersey.

For a look at what you can and can’t do in each state click here.

How Can I Bet on Sports?

The party kicked off with legal sportsbook outlets as we mentioned above, but it won’t end there. The next step will be more localized options. Maybe not in the form of an NFL-licensed kiosk at your local 7/11 just yet but that’s undoubtedly where it’s heading. If it’s legal to sell other goods at mall kiosks, it’s a safe bet that someone will try to seize that opportunity and set up a way to bet on sports there too.

Your cellphone or other mobile devices will start to play a role in how you can bet on sports. It won’t be hard to establish a situation where you have to be within a specific geographical range to place your bet seeing as Daily fantasy apps including DraftKings and FanDuel are already doing it.

Hopefully, in the not-so-distant future you’ll be able to go to a sports book/bar watch a game with friends and be able to bet on it, just like you can in Vegas.

Although sports betting is now legal, it’s just a matter of seeing how the regulations play out on a state-by-state basis. So keep an eye out for no deposit offers online too, as they become available in newly regulated states.

What are the Sports Leagues Saying About This?

At first, all four major leagues, the NFL, NBA, MLB, and NHL, were against the legalization of sports betting in the United States citing that the integrity of the game could be compromised through a rise in corruption.

However, now that the Supreme Court ruled in favor of legalization the major leagues are getting on board because they certainly won’t want to miss out on their cut of the action.

Take the NBA for instance. They’re the first American sports league to sign a deal that permits a casino to use their team names and logos. This comes in the form of an exclusive partnership that the NBA signed with MGM Casinos, making the gaming company the official betting sponsor of the NBA.

Most sports leagues will probably take a long-form approach to the recently legal sports betting industry, but it wouldn’t be a surprise if, in the future, the NFL, NHL, or MLB developed their own gambling app, acting as the “house” to take bets from their fans.

This would be a win-win situation because a major league won’t fix the outcome of a game to try and win against their patrons and as the house, the major leagues have a chance to rake in the money by charging juice.

So, no matter which way you look at it, the legalization of sports betting in the United States is a massive opportunity to generate revenue, and there’s no way these major leagues won’t figure out the best way to maximize the profits.

Sports betting in the usa is going big, what you need to know
Tagged on: betting    going    know    need    sports