If you harken back to the early poker boom years, the names Martin de Knijff and Bill Edler may ring some bells.

They’ve both been on the business side of sports bookmaking and technology (Edler was listed in the “Molly Bloom” indictments). The two are now with Metric Gaming, and they see a booming future in “Super Live” golf betting.

As de Knijff notes, while Super Live betting, which in golf’s case gets as micro as recalculating odds for a certain golfer based on the distance of each putt, has some absolute degenerate appeal, it can draw in casual fans too, stating they may view it as, “…hey, I’ve got some time to kill, and here’s something I can engage with right away.”

As with most things, the truth is in the middle there. Super Live betting is like crack for degenerates, but also provides casual fans with some edge-of-seat engagement too.

While possibly a somewhat self-serving believe, de Knijff believes that golf betting (and presumably with Super Live action) can capture 10% of the total turnover for U.S. sports betting.

And the PGA Tour is good with this?

The PGA Tour has already announced starting an integrity program and has joined other sports leagues in a push for integrity fees and official data rights.

Plus, you know that the PGA Tour knows that Tiger Woods isn’t going to be in contention every Sunday (where he’s good for a 37% or more ratings bump). 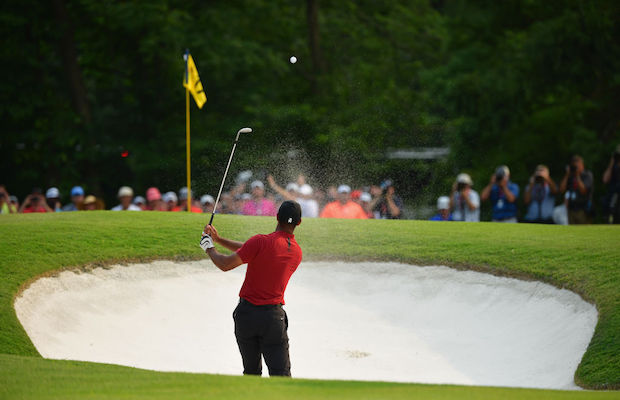 And as we’ve noted on TheLines, there’s some correlation to increased golf ratings and the rise of fantasy golf on DraftKings.

Integrity fees aside, increased ratings equals increased advertising and sponsorship dollars. Anything to juice the ratings, especially as golf has seen its viewership decline the past decade, is good for the bottom line.

You don’t need Metric Gaming to calculate the odds of the PGA Tour supporting live betting. It’s absolutely in their best interest to do so, perhaps more than any other sport right now.