Almost seven months to the date after a U.S. Supreme Court ruling allowed states to legalize sports betting, Mike Davis was the first in line at SugarHouse Casino in Philadelphia on Saturday morning, ready to place a bet on a college basketball game.

“I’m betting on Seton Hall over Rutgers, all day,” he said. “That’s the lock for the day.”

Behind him were at least a dozen more people looking to usher in a new era of gambling in the city as SugarHouse became the first casino in the Philadelphia area to offer it.

“We finally got it after all these years,” said Davis. “I’m just glad the federal government is blessing me right now.” 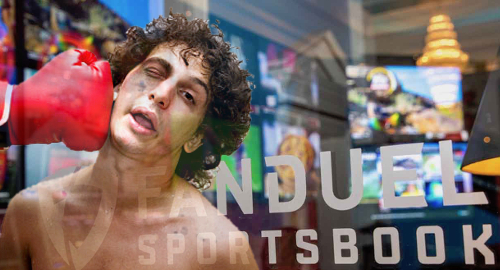 State and local officials along with SugarHouse staff cut the ribbon to mark the official opening of sports betting at the Fishtown casino Saturday morning. (Brad Larrison for WHYY)

Shortly after a 10 a.m. ribbon-cutting ceremony, eager gamblers filed to the sportsbook to place their wagers. City Councilman Mark Squilla placed the first official bet, putting up $20 on the Eagles versus the Rams.

The new attraction should reduce illegal gambling and provide bettors a sense of security, while bringing in tax revenue for the city, Squilla said.

“Now you give people the opportunity to feel happy about themselves to be able to go and do it legally,” he said. “You don’t have to travel to Vegas or go to another city to do it. Therefore, you spend your dollars locally in the city of Philadelphia.”

Gamblers seemed to relish the convenience.

Davis, who lives in Cherry Hill, New Jersey. Sports betting has been legal in the Garden State since June. He used to drive 45 minutes to place his bets in Delaware. Now, he only has to drive about 15 minutes to SugarHouse in Fishtown.

“I’m saving gas, tolls, and … it’s just a lot more convenient, so I might be coming out here a lot more,” he said.

Northeast Philadelphia resident Barbaro Rubio says he used to make his wagers at “the corner store.”

SugarHouse and its sister casino in Pittsburgh, Rivers Casino, are now the second and third in Pennsylvania to offer sports betting. Hollywood Casino at Penn National Race Course in Grantville became the first last month.

Though Saturday was the first official day of sports betting at SugarHouse, gamblers beat Squilla and Davis to the sportsbook Thursday for the start of a two-day test period, supervised by the Pennsylvania Gaming Control Board.

Todd Lambert of Philadelphia waits to place his bets at the SugarHouse Casino Saturday morning. (Brad Larrison for WHYY)

Evan Davis, vice president and general counsel of SugarHouse, said there has been a “steady flow of people” since the initial soft launch. He believes it’s a sign of good things to come.

“Judging by the way things have looked for the last two days and ten minutes or so, it looks like this is going to be a vibrant part of our business,” he said.

Sports betting in New Jersey has generated more than $73 million in gross revenue since June.

That number is making SugarHouse executives feel optimistic, along with the reception from local sports betters, even though Pennsylvania’s $10 million licensing fee for sports betting and 36 percent tax rate on gross sports wagering revenue is the highest in the country — more than four times that of New Jersey.

Despite this, Cheryl Duhon, general manager of SugarHouse, said “a tax environment is part of the gaming industry” and the casino would rather focus on “bringing in a whole new clientele.”

Todd Lambert of North Philadelphia is looking forward to a shorter commute to place his sports wagers. He said he also travels to Delaware, where sports betting began back in June, every week to bet “a couple dollars.”

“I can stop going to Delaware,” he said, “stop going across the line, traveling all that time. [It’s] quicker. That’s it.”