The family lived in Carlstadt, a few blocks from the shop. Michael was treated as just another employee. 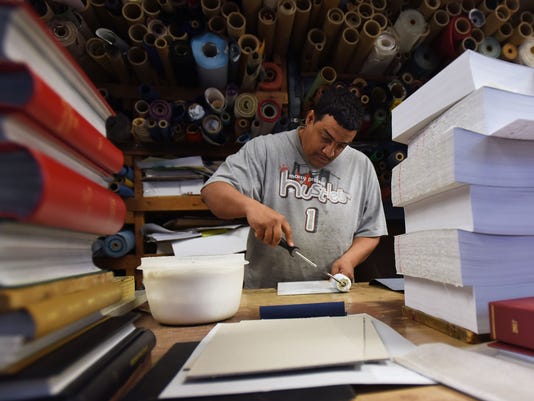 Michael tried a few semesters of college but soon returned to the book business, at first grudgingly.

“Initially no, I didn’t like it,” he said. “My father was hard on me when it came to work, so there was not real fun.”

The little shop gained its hold gradually. LoGatto’s two younger sisters had no interest in running the company. If LoGatto didn’t keep it going, no one would.

“I always felt an obligation to stay here, to continue it,” he said as the song "Takin’ Care of Business” by Bachman-Turner Overdrive played behind him, on wooden speakers as big as filing cabinets. “Why? It’s a family business. My father established something, I’ve known it all my life.”

Father and son worked side by side for a decade. Gradually, Medo slowed down.

“There was no talk, no discussion,” LoGatto said. “Just one day after lunch he didn’t come back. Then he was coming in later, leaving earlier, some days not coming in. So it was like, OK, I guess I’m running it now.”

That was 20 years ago. In a world where the president fires his secretary of state by tweet, here in a family-owned bookbindery the transitions of power take longer.

“Technically he’s still the owner,” LoGatto said of his father, who is 82. “He still comes in, and if he finds something on the desk that’s a little skewed, he fixes it. You know, old-school Italian.”

A faster (but still slow) fall

LoGatto Bookbinding used to have five employees. Now it has one, Jay Cruz, 38, who has worked here for a decade. On a cold morning recently, Cruz stood at a waist-high table in the back of the shop, binding together bulletins for a church in Maryland.

He used a hand roller to spread glue across two thick pieces of the binder’s board, then laid the boards onto blue paper that was pebbled, like leather. (Actual leather, in the form of cow and purple goat skins, lay in scrolls behind Cruz’s knees.) To assure the glue’s solid grip, he pressed the paper to the board using a creamy white sliver of cow’s bone.