A few years back, while paging through old editions of the Turf & Sport Digest, I came across a cartoon that I found intriguing even though I didn’t totally understand it. I made a copy of the cartoon and saved it along with thousands of other source material that I hope to revisit someday. While digging through the archive recently, I came across the cartoon again and, this time, I understood its meaning. Here is the cartoon as it appeared in the T&S from January 1952: 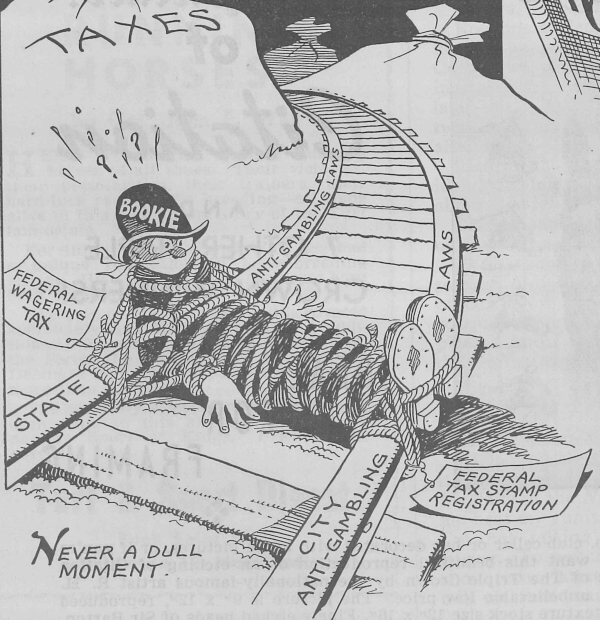 One of the many theories behind the increased popularity of racing in the 1950s was the successful push against illegal gambling in the early part of the decade. The United States Senate Special Committee to Investigate Crime in Interstate Commerce, better known as the Kefauver Committee after its chairman Estes Kefauver, dominated the news in 1951 and 1952 and shed light on an alleged widespread criminal conspiracy that included, among other things, illegal gambling on sports, primarily horse racing. Officially, bookmaking on sports, including horse racing, was against the law but it lived on through ‘tradition’, graft, and indifference especially in places like Saratoga Springs and New York City. Without going into all of the details – you can find plenty to read elsewhere online – the committee’s most tangible success came in its effect on swaying public opinion. An estimated 30 million viewers watched the television broadcast of the proceedings. Minimal federal legislation came out of the hearing but actions on the state and local level — welcomed by a now informed public — drove illegal wagering on racing far underground. In the wake of Kefauver, the racetrack became one of the few reasonable and legal places in the country to make a bet on a horse race.

With the changing tide against illegal bookmaking, the 1952 cartoon in Turf and Sports Digest makes sense. After over a half century of the racing bookmaker fighting for survival, especially in places like New York City, the cartoon shows him waiting for the train to finally put him out of his misery — his end had finally come.

The great Joe Palmer began the 1951 American Racing Manual with an observation on the effects of Kefauver on that year’s racing scene. A widely accepted opinion among racing people at this time was that bookmaking and other forms of illegal gambling benefited the legitimate action at the racetrack. Palmer seemed keen to bat that theory out of the park and seemed to enjoy doing so:

An argument which had stood what is called “the test of time” was slapped abruptly down in 1951. The reason it had stood up so long was that it had had no other test – people had been repeating it for years and since there had been no ‘way to check’, it had come to be believed. This was the argument that illegal betting on racing – and at Saratoga illegal betting of other sorts – was in one way or another beneficial to legitimate racing.

The theory, as advanced, was that all over the nation handbooks [bookmakers] were rounding off their figures by laying off bets, in the form of “comeback money,” at the tracks, and that without this pari-mutuel handles would drop. As the year progressed, what with the activities of the Senate committee investigating syndicated gambling, and finally with the Federal law requiring the registration (and taxation) of bookmakers, illegal gambling was reduced to a thin trickle, certainly a low mark for the present century. Bookmaking was not obliterated, any more than murder has been. But it was checked extensively, as murder has been checked. The wire services suspended operations for lack of customers. Comeback money disappeared.

At every major meeting, except for two in California, and at every minor meeting except for one at Weymouth Fair, there was a marked increase in betting, and usually in attendance.

Hard breaks in history are rare but it would seem that the opening years of the 1950s did indeed bring a major change to the American gambling scene and, more specifically, the business of racing.

A broader, historical perspective about how this played beyond our micro view here might debunk this in-the-moment analysis from Joe Palmer. However, his observation in the moment is valuable and worth documenting here at Colin’s Ghost. Sadly, this was the final edition of American Racing Manual authored by Joe Palmer. He died in 1952.

I highly recommend Arne Lang’s Sports Betting and Bookmaking: An American History — I reviewed it here. Mr. Lang has an interesting theory on the crackdown of racing bookmakers in the 1950s. He is somewhat dismissive of the effects of Kefauver. He argues that the revenue generated for state governments from taxes and takeout from legal pari-mutuel wagering pushed local law enforcement to squelch the competition. And interesting and plausible threory. His book is really good and worth a look. Buy it here

For folks who are on twitter, I am moving to a new account @RacingHistory. I am deleting the old account to start anew. Too much politics on the old account — I am fighting my political battles elsewhere. Twitter and social media (especially Facebook, deleted that account too) are black holes for real political action and discussion. The new account will be for horse racing, sports, and other interesting things but no overt political stuff (saving that for where it might actually make a difference).

Thanks for reading and good luck!