Want to preview the future of golf? Check out the pay-per-view broadcast of The Match: Tiger vs. Phil the day after Thanksgiving.

The made-for-TV match between the top golfers of their generation will feature a sports betting-friendly broadcast. Turner Sports, the producer of the broadcast, announced Friday the broadcast will feature “first-of-its-kind integrations centered on predictive data.”

How exactly will that happen? Read on:

The broadcast will include real-time, hole-by-hole statistics that will be displayed on screen to forecast the probability of certain outcomes during the match. The data is based on a model and algorithm that combines ShotLink Intelligence with characteristics of Shadow Creek to calculate the likelihood of various scenarios to occur.

Separately, after a hole has concluded, the broadcast will integrate a proprietary data stream provided by the MGM Resorts Race & Sports Books – in association with the MGM/GVC Interactive Gaming Joint Venture – to deliver odds, moneyline and other information associated with the golfers’ performance. 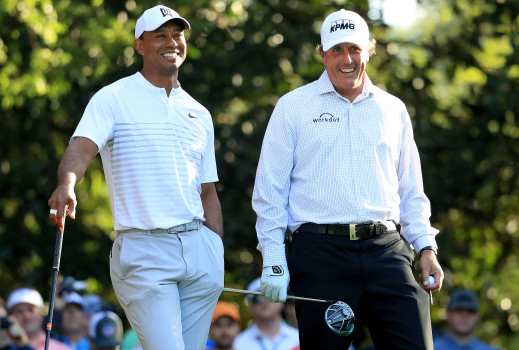 That means viewers will test-drive not only golf’s wagering future, but also the potential for integration of sports betting information directly into broadcasts.

Perhaps no American sport presents as perfectly for in-play betting as golf, specifically the PGA Tour. Tiger Woods and Phil Mickelson will continue the sport’s experimentation with this, last seen at the Ryder Cup.

The pacing of play features a few minutes between shots on tour. And with each player taking roughly 65-80 shots per round, every drive, putt, and flop offers a prop.

In a lower-stakes setting than a Tour event, the Tiger vs. Phil match will put those possibilities in the spotlight, in a roundabout way:

Both Woods and Mickelson will selectively make side challenges against one another during the live competition. For instance, Woods or Mickelson could raise the stakes by challenging the other to get closest-to-the-pin; whether one of them can make a crucial putt from 10-feet away; the chances of getting “up-and-down” from a certain location on the course or similar competition during a hole as they play their match, with money being donated to the winning golfer’s charity of choice.

It does not appear bettors will be able to place their own side wagers on the ones Woods and Mickelson make.

Other tech advances featured in Tiger vs. Phil

Betting information will be only one of the new elements to the Tiger vs. Phil match. Turner also will modify the viewing experience along the course with different perspectives:

The Tiger vs. Phil match will take place at noon PT/3 p.m. ET on Friday, Nov. 23 at Shadow Creek in Las Vegas.

The pay-per-view will set you back $19.99 on PPV and is available through B/R Live, DirecTV, and AT&T U-verse, as well as other cable providers. A 4K HDR broadcast costs $29.99 on DirecTV.