The PGA Tour’s alignment with the NBA and MLB on the integrity fee is about paying for the compliance measures needed in order to mitigate the risk of betting scandals.

The pair of leagues originally expressed a desire to have operators of sportsbooks pay an integrity fee, totaling 1 percent of each bet. The proposal was met with some resistance, as many feel that taking a percentage off the top will deter illegal bettors from utilizing the regulated markets.

"Sports bettors are looking for the best odds. [The regulated markets] need to be competitive," Slane said, adding that the illegal books already have several advantages. "They don’t pay taxes. Who knows what they pay employees. They’re not held to the same standard," as the regulated bookmakers, she added.

The debate over an integrity fee will continue after the Supreme Court decision and it will be handled on a state-by-state basis. New York recently introduced a Senate Bill that grants the leagues 0.25 percent of the wagers, rather than the 1 percent asking price from the leagues’ proposals.

The leagues are working with individual states on regulation. However, the NBA would prefer a uniform approach in regards to coming up with the solution.

"Our preference is a comprehensive federal approach rather than state-by-state regulation, but we will continue to work with all states seeking our input on a regulated framework that protects the integrity of our game and fairly compensates the NBA’s teams and players," Mike Bass, the NBA’s Executive Vice President of Communications, tells CNBC in a statement.

One of the AGA’s main goals is to shut down illegal books, something all parties would benefit from. Transferring the illegal bettors to the regulated marketplace would mean more taxes paid, more interest in leagues, and less crime. However, imposing a set fee may hurt the odds and not give any incentive for bettors to move over to the legal marketplace, something Slane described as already a "low margin business."

It may even mean legal operators failing as a business.

"People misunderstand the handle. … After paying winners, taxes and other costs, [bookmaking] is about a five percent margin business," Slane said.

The risk for betting scandals exist anywhere there is legal wagering and there’s a cost for policing the activity. "The leagues should get a piece," Mintas said, while cautioning that the amount they receive shouldn’t be so much that it overburdens the bookmakers. "It’s fair [for the leagues] to get something." She added, "[With the legalization of wagering], match-fixing will come more into the daylight. There need to be procedures in place."

Mintas previously served as the director of sports integrity at CONCACAF, the governing body for soccer in North America, Central America, and the Caribbean. "Match-fixing is a potential threat and it is often related to organized crime," she said. 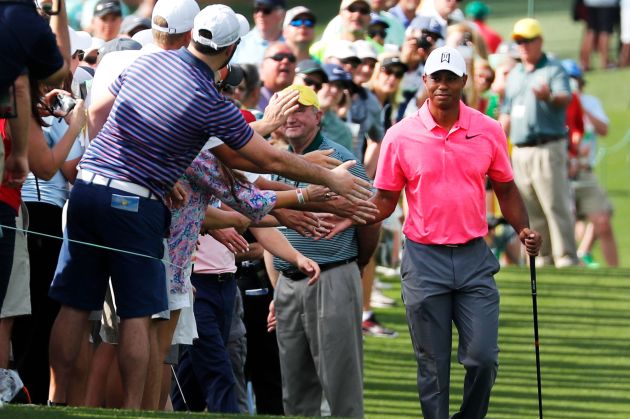 "Fans will be less willing to engage with a sports league if they don’t trust in the integrity of the sport and they feel that the outcome is corrupted. This highlights the need to build trust with fans by implementing integrity services and being proactive on rooting out match-fixing," Mintas said.

Sportradar collaborates with several leagues, including the NBA, NHL, and MLS, to deter scandals and help them be "prepared for scenarios." It doesn’t partner with the PGA Tour, but Mintas said golf is not immune to the risk of match-fixing.

"Every sports has potential for scandal and golf is also at risk," Mintas said, adding that sports like "tennis and golf are difficult to investigate."

Updated for information from NBA on its stance regarding the proposed legislation in New York from Mike Bass, NBA Executive Vice President, Communications.

Tiger woods back at masters leads to surge in golf betting
Tagged on: back    leads    masters    tiger    woods